… was just recently published by NASA and is now available via Google code. Google has a nice blog post on it.

Of course, reading the “old” assembly code is a probably a bit hard even for today’s programmers used to high-level languages, and even more so for non-programmers. I still think these are excellent documents and at least the comments speak to folks with technical interest (and some are really explicit ;)).

While digging through this material, I found a very interesting and insightful article on the Lunar Module Guidance Computer by Don Eyles, who was deeply involved with its programming. This is a long article, but it is a rewarding read. It not only offers a lot of insight into how challenging it was to fly with these day’s hardware (every cell phone has *far* more capability today, maybe even washing machines…). The article also explains, in plain word, some concepts that were created for Apollo and influence today’s programs as well.

Most importantly, I think that the Apollo program not only showed that mankind can leave earth. It also is probably the first instant where computing machinery was absolutely vital to achieve a goal. In the Apollo days, there were some overrides possible, and obviously needed. Today, we are betting our life more and more on technology, and often without a real alternative. Having overrides would sometimes be useful, too, but we seem to partially forget that ;)

But enough said: enjoy these documents!

In case you have not yet heard it on the twittersphere, here is something you should really look into: there is a so-called “red” threat that the ISS is being hit by debris. The ISS crew is currently closing hatches and preparing to move to the attached Sojuz return vehicle, in case this should be required. The full story is at nasaspaceflight.com. I also strongly recommend to dial in to NASA mission audio. The critical time is 5 minutes around 11:39am CDT.

I think I found the following two interesting links to track the debris and the International space station.

Thankfully, the event is now over and nothing happend (no news is good news :-)).

Here is a picture of the two satellite trackers around the time of the close encounter. Have a look at latidue, longitude and elevation in the trackers. 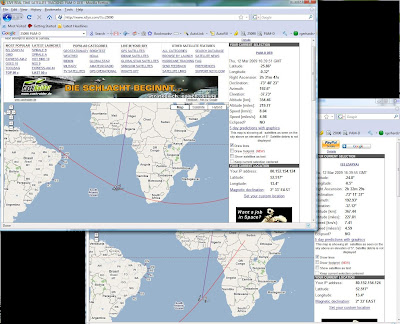 Hello everyone and welcome to the 34th Carnival of Space. Usually, I write about spaceflight and mostly about the space shuttle, ISS and Constellation programs. For the carnival, of course, I’ll broaden my reach. I think Fraser for trusting me with this weeks carnival, much appreciated.

The end of the year is approaching (too fast, as always) and, of course, this calls for a number of “best of the year” things. And, of course, there are now twelve Astronomy Pictures of the Year for 2007. One is more breathtaking than the other. And of course, the bad astronomer has his own stunning ten favorites.

And the bad astronomer also tells us why we should enjoy life now – look at the death ray from 3C321! Steinn Sigurdsson also writes about 3C321 and also has a link to a nice animation. And Centauri Dreams speculates about “Gamma Rays and Civilizations” or, better said, the extinction of the later. 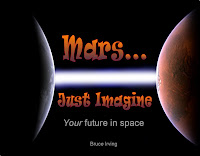 It is also xmas time – and FlyingSinger is giving away a Mars picture book … where he documents his simulated mission to Mars. A well-done and very inspiring work. And Colony Worlds has just right in time posted a solution to maintain human body strength on other celestial bodies. They use Gravity Suits for Off-World Children.

Back on earth and with real hardware, Ian remembers the first Australian satellite, which just happened to have its 40th anniversary. Coming closer to the present, I have followed NASA’s Tuesday space shuttle tanking test. I hope it captures some of the excellence with which engineers over there work.

The Babe in the Universe fills the gap between now and then: she looks at the moon and NASA’s activities about it. So, among others, she noticed that NASA Associate Administrator Alan Stern announced selection of the GRAIL mission to the moon. Here it fits well that Advanced Nanotechnology talks about scramjet technology, which may also provide an alternative to regular rockets.

The Space Cynic proves that anyone can get quoted in the newspaper these days, as his decidedly pragmatic views on the recently concluded Space Investment Summit are carried by the Los Angeles Times. And, judging from the comments on the blog post, some space tragics are decidedly unhappy about this.

And, finally, there is the ultimate post for this time of the year – at least I think so: a recent “Astronomy Picture of The Day” left Stuart Atkinson wondering about our place in the universe, and what exactly we are looking at when we look at an image of the starry sky… Get inspired – and think a bit about our own importance!

What a perfect ending for this week’s Carnival of Space. If you would like to enter next week’s Carnival, be sure to email your entry to carnivalofspace@gmail.com; also feel free to visit Universe Today for the Carnival archives. In the mean time, I wish you happy holidays!

… but this time not to Florida but to the Columbus Control Center located in Munic, Germany. The details are in my space blog for those that are curios ;) The bottom line is that I am away from my development machine from tomorrow afternoon until Friday at around noon.

Please keep your fingers crossed so that I can experience an on-time launch. This time, I can not stay any longer…

Yesterday, some info leaked that the shuttle … well, leaked ;) To be serious, there were reports that there is an unacceptable leak at a shuttle strut – hydraulics fluid seems to have been leaking. But yesterday the decision was made that a repair is actually needed.

Of course, it didn’t take long for all sorts of rumors to appear. Some sources even said that the October mission would be canceled and moved to January – which is as far from being true as it only can be. In fact, the NASA source quoted above does not outrule there is a change in the launch date, but it is expected to be not a major hit. As far as I understand it, things may be moved a few days at most. There seem to be buffers all along the process, so I do not yet begin to panic ;)

… but I have to admit that this triggers bad memories. As I said, I flew in into Orlando last year to see the STS-115 launch (which I finally didn’t make due to its long delay). With STS-115, all the trouble also started with launch delays, that time caused by a lightning strike. That, too, was quite some time before launch, at least if I correctly remember. It was not that early as the current problem, which leaves me with the firm hope that there is enough buffer time available even to launch on the target date of October, 23rd. Let’s see…

As some of you know, I am addicted to astronomy and space travel. Since long, I’d wanted to experience a space shuttle launch. Last summer, I got tickets for the STS-115 mission. I went down to Florida, went through a hurricane and … had to leave without the shuttle being launched. Well, actually I could view it rocketing into space from far away (Fort Myers) when I had to leave home. That was really bad luck.

Unfortunately, I either could not go for the next missions or I didn’t manage to get tickets (they sell out soooooo quickly that it is a real problem even if you type fast ;)).

Now, I was lucky enough to secure tickets and also manged to get enough vacancy to do a re-try. I am going to visit the STS-120 mission now. We’ll fly in to Orlando and then move over to the Titusville/Cocoa Beach area. Getting it all together was far from being simple.

After I got the launch tickets, I needed to get flights and then find hotels. This list is sorted in descending order or rareness ;) While I had only a 3-minute shot at obtaining the tickets, the flights were quite complicated too. Hotels were available, but of course not those I hoped to find. Based on experience from fellow travelers, Titusville seems to have only one decent hotel. I can back this, as I found none on my previous trips. The one in question is the Hampton. Everybody seems to know, and I didn’t get a room for the 22nd ;) But everybody also seems to expect the shuttle to take off on first launch attempt – because starting from the 23rd there were vacancies. I secured some of them ;)

I hope to have a really great launch experience. I hope I’ll find time to post more of my experiences on the way to the launch here in the blog. I’ll probably even start a STS-120 section on my site www.gerhards.net – let’s see :)